The following are all photos that either turned out better than I expected or worked first time when I was trying something difficult or strange. Some are just photos that I took quickly or in difficult circumstances (like from a bus window) that actually turned out perfect.

Vidden, the plateau above the City of Bergen in Westen Norway.

The mountains of Norway are wild and rugged but there are many little (and sometimes bigger) mountain huts dotted around them. I just like this because it is (to me at least) so stereotypical of the Norwegian mountians.

Invermorriston Falls on the side of Loch Ness

While working in Scotland I regularly took guests to visit these falls and the old Caledonian Forest nearby. I also drove by even more often but for some reason never took my tripod. On my last time passing by I had also forgotten my tripod but managed to capture the movement of the falls by taking multiple images of a short exposure so that they added up to a long one but without the inherent camera shake of hand-holding a long exposure.

The crocuses bloom in the springtime in the alpine meadows of Tirol. In the spring in the Alps the meadows are covered in wildflowers. This was on my way home from work and I managed to capture it with my phone fairly successfully. The best camera for any scene is always the one you have with you.

Camping under the Stars of the Milky Way in Dalfreggen in Osttirol.

This was my first attempt at photographing the Milky Way. With a bit of planning and a bit of luck we found a perfect spot in one of the few dark areas of Austria to camp in. However the light pollution is still visible just over the hills. Still though for a first attempt I was fairly happy.

When I had a bad back and my doctor thought I shouldn’t carry anything more than 2 kg I managed just about to bring my camera and its long lens on walks with me. I was playing with this gull for ages as he flew around the headland, tracking him and trying to keep him both in focus and in the frame at the same time. As he flew across in between me and the sun I captured this image with the sea sparkling beneath him. It was worth the 50 or so others that were unusable. 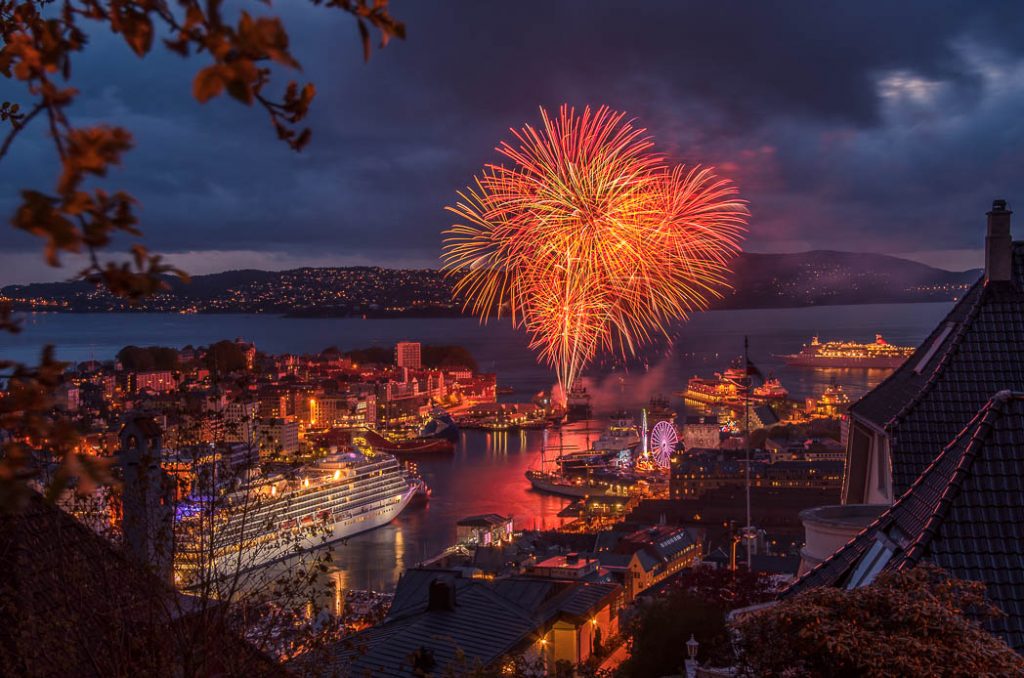 Fireworks for the Norwegian National Holiday

Having done so much work in the hospitality business I always seem to be working on special occasions. This year while I was recovering from back injury I was excused from working on the National Holiday, 17th May, in Norway. I hiked up the hill to take photos of the fireworks, the first opportunity I had since everything became digital. I was very happy with the results of a photo I had imagined taking for years.

Sunrise over the city of Bergen, coated in a fresh dusting of snow.

Sunrise over the city of Bergen on a snowy winter morning. View is from the top of Mt Fløien.

I had often wanted to take a panoramic photo of the Sunrise from the top of Mount Fløyen but never gotten around to it. After returning from Oslo for Christmas though there was a lot of fresh snow everywhere and I vowed to check the weather early in the morning. As it was good I headed up the hill (by funicular) and stood where I normally stood with 100’s of tourists during the summer. On this morning at 8:30 it was pretty much deserted apart from a few skiers heading into the forest. I managed to get 4 different but excellent photos from the same spot as the sun gradually edged over the horizon. Every summer I had thought about this image but hadn’t been in the city during the winter to take advantage of where the sun is at the end of December.

This spider monkey was just a casual photo while testing out new wildlife techniques in our local wildlife park. However after reviewing the images this one really stood out. 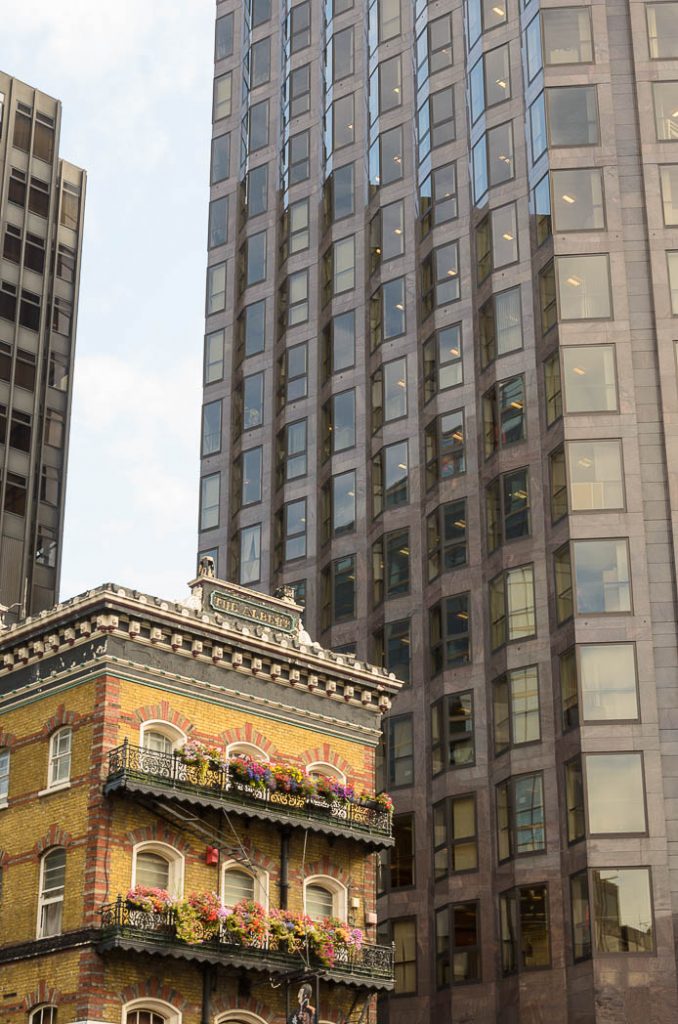 Central London is a mix of the old and the modern side by side.

This is another image that looked interesting when I took it but impressed me way more when I saw it on the screen. I think the contrast is even bigger when seen without the clutter you see through your eyes.

Wild in the Zoo

A wild red squirrel taken while he had lunch in the Berlin Zoo.

When in Berlin zoo I met this squirrel. He was actually a wild animal wandering round the grounds. I like the irony.

The two monkeys above were just outside the National Park of Bardia in Western Nepal. When I arrived in the area I thought I would go for a stroll before it got dark and met them along the way. It was sort of like they wanted me to photograph them as they both hung around for quite a long time while I tried to get images without branches or leaves in the way.

Sunrise in the Himalaya taken on a March morning. It was about a half an hour’s climb out of Namche Bazaar in the freezing cold and at an altitude non of us were used to yet to be up in time for the sunrise. It was worth it though and the photos only capture half of the beauty.

When you put as much effort into a photo as this one then you are bound to love it. The climb up the hill wasn’t very far but when you aren’t quite used to the altitude it takes a lot. Also when it is below zero it is hard work. The sunrise and the photo were a just reward though.

Two zebra of the quarter of a million that make up the annual migration in the Serengeti/Masai Mara system.

Zebras are everywhere during the great migtration. However sometimes you get bored of them. These two were just another two zebras so I didn’t put much effort into the image. Unfortunately when I got home and discovered how nicely aligned they were it was disappointing to see that it was a bit blurry. However a little bit of effort and an ‘artistic’ processing style and I quite like the image.

Peyto Lake in Banff National Park, one of many beautiful lakes in the park, probably second only to Lake Louise in popularity.

On the Icefields Parkway, Peyto lake is photographed by everybody. It was something that I had dreamt of seeing and taking a photo of since I was young as it is somewhat of an iconic image. The first time I was there I got this image on film but the film got damaged and had a bit of a strange colour cast on one corner. I was happy to be able to go there a second time and get the same turquoise water.

Jasper Train Yards with the Colin Range in the background.

Jasper fits my ideal of a town in the mountains. The small railway yard that is in town is a stopping point for passengers but more often than not freight trains run through it. I just think this image captures the idea of a non-urban Canada. Wild mountains tamed by the grain cars of the Prairies.

The Northern lights in Iceland are a fantastic sight and light up the whole night sky.

When I was in Iceland I only got one day without cloud and was lucky enough to see the northern lights. This was my second attempt to photograph the aurora but the first being in a city didn’t turn out very well. I was happy enough with this but would like another opportunity to get an even better image.

The Triomphal Arch of Innsbruck lit up with Christmas lights and traffic.

I had seen a tutorial on image blending (to get more car lights) on YouTube and as soon as I saw the Triomphal Arch in Innsbruck I knew I wanted to try it. It took me a while to get organised but then with the Christmas lights adding to the atmostphere I think I got quite a good photo.

Evening in the Inntal

I was pretty impressed with this evening photo of the Inn valley, with Innsbruck on the side. I had actually hiked up here with the intention of finding a place to get a picture when the sun was setting later in the summer, in line with the valley. In the end it seems like that wouldn’t be possible but this turned out quite nicely itself.

While in Iceland there as a picture on the front of one of our guides of this area, the so-called Church Floor. When I saw it I wanted to get an equally stunning image of what is really just a small amount of funny shaped rocks. When we finally found the rock formation the sun was going down (dusk is long in Iceland) and I managed to get three images to blend and make this final one.

Want one of my photos on your wall?

I use the pixels.com to print my photos on top quality fine art materials. All prints come with a 3o-day money back guarantee.
Purchase Prints

This site uses cookies, usage of the site (by continuing to navigate) implies acceptance of this. more information

The cookie settings on this website are set to "allow cookies" to give you the best browsing experience possible. If you continue to use this website without changing your cookie settings or you click "Accept" below then you are consenting to this. Scrolling or continuing to navigate will be considered acceptance